Biodiesel is a green alternative to conventional diesel that is produced from agricultural crops, vegetable oil or animal fats. This fuel is produced by transesterification, which is a process that converts fats and oils into biodiesel and glycerin (a co-product). The raw materials, often referred to as feedstock, are locally available throughout the country and can also be recycled from waste.

Pure biodiesel does not contain petroleum, but it can be blended at any level with petroleum diesel to create a biodiesel blend. There are generally three different blends, named by the amount of biodiesel present in the fuel. B5 contains up to 5% biodiesel fuel, B20 contains 6%-20% biodiesel, and B100 contains 100% biodiesel in its pure, unblended form.

B5 -This blend contains up to 5% biodiesel mixed with conventional diesel. Because biodiesel concentrations are so low, this blend is allowed to be called diesel fuel, with no separate labeling required at the pump. Low-level biodiesel blends, such as B5, are approved for safe operation in any compression-ignition engine designed to be operated on petroleum diesel.

B20 – This is the most common blend of biodiesel because it represents a good balance of cost, emissions, cold-weather performance, materials compatibility, and the ability to act as a solvent. B20 can be used on conventional diesel vehicles without requiring any modifications. Engines operating on B20 have similar fuel consumption, horsepower, and torque to engines running on petroleum diesel. B20 with 20% biodiesel content will have 1% to 2% less energy per gallon than petroleum diesel, but most B20 users report no noticeable difference in performance or fuel economy.

B100 – B100 is less common than the other blends due to a lack of regulatory incentives and pricing.  Biodiesel-compatible material for certain parts, such as hoses and gaskets, allow B100 to be used in some engines built since 1994. 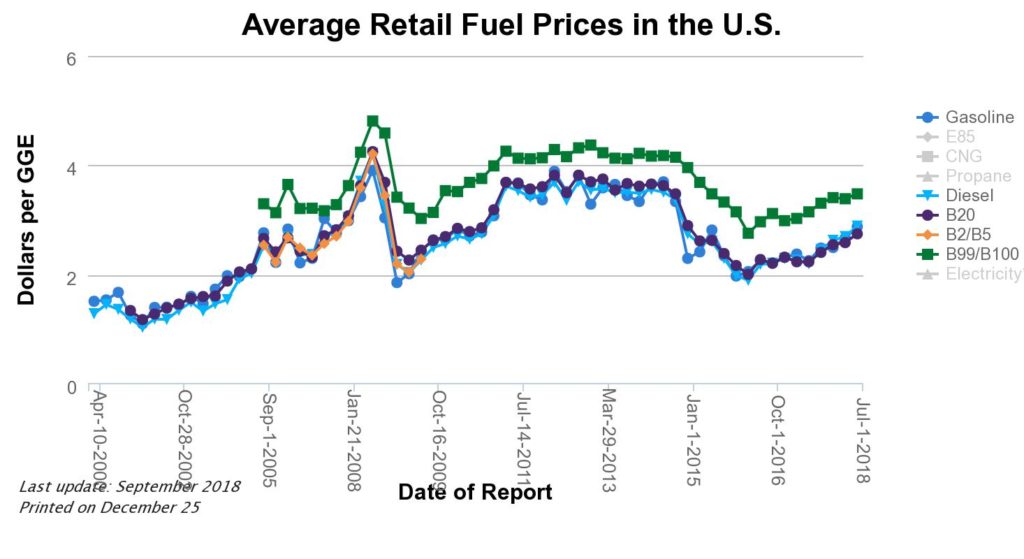 Conveniently, biodiesel can be used in any vehicle with a diesel engine without any engine modifications and is very similar to diesel in fuel economy and efficiency. Common applications include buses, delivery trucks, waste disposal and recycling trucks, construction and farm equipment, heavy-duty freight hauling, boats and passenger vehicles. B20 is the most commonly used blend, but B5 is also often used in fleet vehicles. All original equipment manufacturers (OEMs) approve the use of B5. However, it is important to check the OEM engine warranty to ensure that higher-level blends of this alternative fuel are approved, such as B20.

The United States imported 19% of its petroleum in 2017. The reliance on foreign petroleum supplies puts the U.S. at risk for trade deficits, supply disruption, and price changes.  Biodiesel is produced domestically in the United States and can be used in conventional diesel engines, increasing the country’s energy security. Using biodiesel reduces emissions because carbon dioxide released from biodiesel combustion is offset by the carbon dioxide absorbed from growing soybeans or other feedstocks used to produce the fuel. Biodiesel can increase fuel lubricity to diesel fuels at blend levels as low as 1%.

BioFuels Atlas is an interactive map that allows users to view and compare the locations of biomass feedstocks, biofuels production facilities, bioenergy plants, biofuels stations, and densities of vehicles that can run on biodiesel